Excursions Along The Wall

The wall, which follows the ridges of Baegak (Bugaksan), Naksan (Naktasan), Namsan (Mongmyeoksan) and Inwangsan, the four main mountains surrounding the center of Seoul, has been constantly managed since its initial construction in 1396. The wall measures between 5 and 8m high and is 18.6km long and it bears witness to the role played by a city wall in the life of a capital city, still sustained in modern day Seoul. 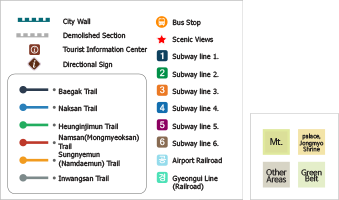